“The Price of Sand”, a documentary film about frac sand mining

“The Price of Sand” is a documentary about the frac sand mining boom in Minnesota and Wisconsin. Due to a rapid increase in demand, pure silica sand has become a valuable commodity, and mines are opening here at a rapid rate.
The silica used in hydraulic fracturing (aka : “fracking”), has other uses– glass manufacturing and toothpaste, for instance — and a few established mines have been in operation here for decades. But now, new companies have arrived, and land with accessible silica deposits is selling for high prices.
In addition to a bonanza for a few lucky landowners, the new mines promise jobs and economic stimulus for the small towns and rural areas nearby.
The Film
Two years ago, an oil company bought a tract of land in near my mother’s house, in rural Goodhue County, Minnesota. The prospect of an open pit mine led to the formation of an opposition group, a series of public meetings, and a temporary county moratorium on frac sand mining.
I’m a filmmaker, so I visited people who live near existing mines and interviewed them. They told me stories–intense truck traffic, plummeting property values, toxic silica dust–a catalog of complaints that surprised me with its variety and intensity. I made clips from the interviews and posted them on YouTube.
YouTube shorts can provoke discussion (56,000 views so far), but the story of this mining boom is more complex.  Good people are on both sides of the issue, and sometimes the facts aren’t obvious.  “The Price of Sand” is a 1-hour documentary film that grew out of my short YouTube video project–more extensive, with new stories–a more comprehensive look at what’s happening.
The goal of this project:   find the real price of frac sand.  Not just in dollars, but in friendships, communities and the future of our region.
Jim Tittle • St. Paul, MN • director
Posted by FC Frac Sand Mining at Tuesday, June 18, 2013 No comments:

Good news (in other places)

Join us as we attend a talk presented by Crispin Pierce, PhD, Professor of Environmental Public Health at UW-Eau Claire.

Tuesday, the Winona County Board approved the first frac sand mine in the County!

It's even more important to see "The Price of Sand." 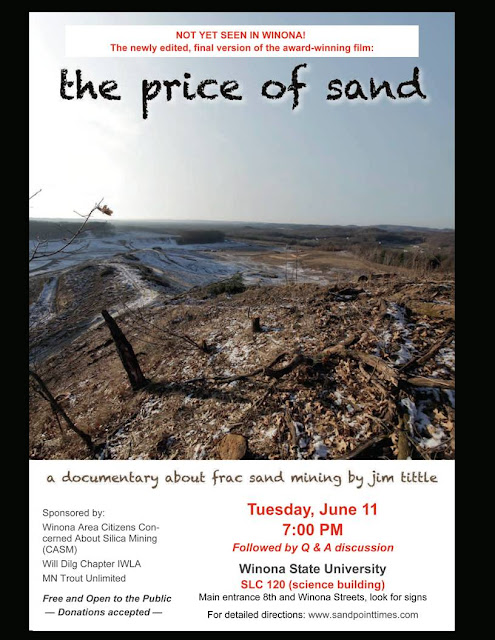 IT'S NOT JUST ABOUT FILLMORE COUNTY